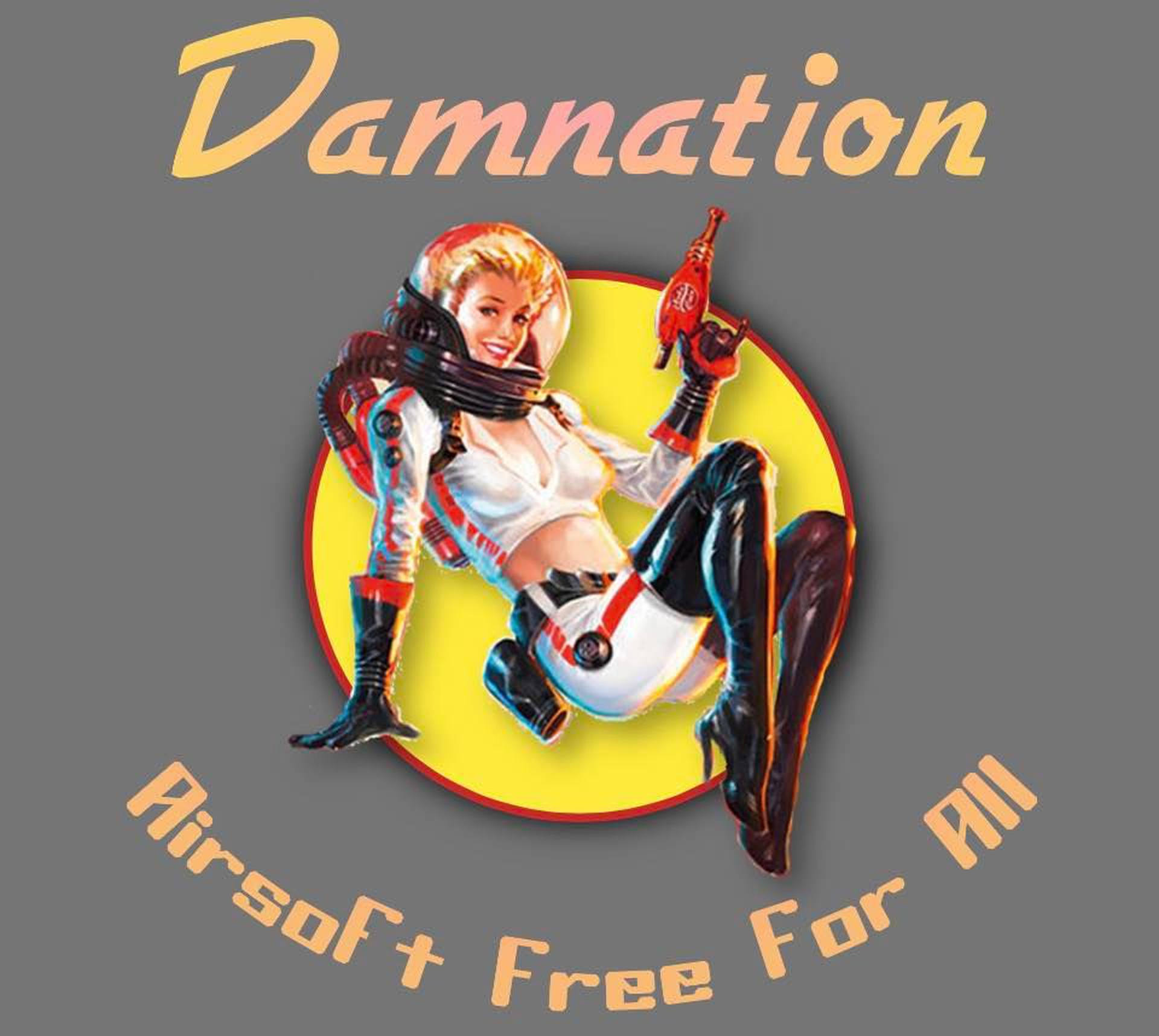 Minimum age : 18 years old
Game style : Long scenario
Grenades : Authorized except pyrotechnics
Smoke : Forbidden
Sign up : Mandatory for the entire duration of the event
Description and Script:
Entry-
Regular $25
VIP $30 = includes lunch.
Bringing donations will gain you (2) caps for every $1.00 worth of donations you bring. Donations include boxes of singly package snacks, 12 pack case of soda, 6 pack of beer, bottle of booze, and case of water.

STORYLINE
In the near future human kind has fallen into nuclear darkness. As civilization struggles to survive, man kind has split into multi faction groups. Energy stones are the only hope we have left in surviving this damnation.
The empire is the only honorable bit of humanity left. Cults rule the woods where no man dares to enter alone.
Scavengers looting anything they can get their dirty hands on for few extra caps. Certain Death awaits all who enter this nuclear wasteland.
ABOUT
Your main objective is to collect as many energy stones as possible. Energy stones can only be purchased with energy tokens. Energy tokens can only be purchased with bottle caps to individuals who complete each main missions. By the end of the event who ever has 1 or more energy stones will be rewarded ! Collect bottle caps to purchase in game items. Earn caps multiple ways in game by completing quests, bounty hunts, scavenger hunts and main missions.
DETAILS
This is an free for all RPG event. Imagine Fallout and Mad Max combined into one universe. Absolutely any thing goes for this game involving clothing or gear, in fact the stranger the outfits the better. All though every man is for himself, there will be 3 main factions anyone can join or betray in game by completing quests given to you by each factions merchant. Players can buy and sell goods between merchants to better each faction. Depending on how well each merchant is doing prices will go up or down.
Main missions-
Buy energy tokens to be able to purchase energy stones. 3 energy tokens = 1 energy stone. Merchants will only sell energy tokens to players who compete special missions.
Empire / Saloon
- Capture 5 scavengers or cultus and bring them to be executed publicly.
- Collect 3 wanted bounties
- Loot one other merchant and return loot to saloon.
Scavengers / Bar
- Kill and loot 5 soldiers or cultus in their own town.
- Gain a level 3 bounty
- Loot one other merchant and return loot to bar.
Cultist / Black Market
- Kill and capture 5 people and bring them to be eaten.
- Win 3 knife fight in a row.
- Loot one other merchant and return loot to black market
RULES
- Call your hits( shots anywhere head to toe expect on gun and by ricochet )
- Bleeding out ( 2 minutes to bleed out before having to return to hospital )
- Reviving downed players ( tie a bandage around downed player arm or leg, can only be bandaged once before having to return to hospital as a dead man. You can pay the doctor to heal your bandage without dying and keeping your bandage for later use)
- Life token ( can be purchased at the hospital, when you die after returning to the hospital you respawn immediately and keep all your in game items. If you don’t have one you will have to wait 10 minutes in hospital to respawn and lose all your in game items )
- Looting other players ( you can loot anyone for little to all lootable items they have while alive or downed, downed players must hand over all lootable items if robbed )
- Bang bang is not allowed for this event, in order to kill someone you must shoot or stab them once.
- Melee weapons are allowed in this event, soft plastic or foam knives, swords, tomahawks, ext.
- Execution ( make a downed player immediately respawn by tagging them with a melee weapon. )
- POW: capturing players by downing or surrendering them to your will. Place a hand on them and walk.
- Lootable items include bottle caps, energy tokens and energy stones. All items supplied by the game. (Excluding life tokens only.)
FACTION SHOPS
$1.00=(2) caps
Buy caps before entering arena or acquire caps by completing missions and doing jobs.
SALOON / BLACK MARKET / BAR
- Beer (4)
- Shot of liquor (4)
- Mixed drinks (5)
- Water (2)
- Hot food (10-20)
- Soda (3)
- Snack (3)
- Candy (3)
- Life tokens (20)
- Energy tokens (50)
- Energy stones
- Bandage (10)
- Heal wounds ( pay merchant to take off bandage to restore your health to full. Keep bandage afterwards. )
JOULE LIMITS
- 1.3 joules - 0ft MED
- 1.5 joules - 25ft MED
- 2.0 joules - 50ft MED
- 2.5 joules - 75ft MED
- 3.0 joules - 100ft MED
(Accounts for all types of guns)
Full auto is allowed for SMG and LMG only. All other guns are simi auto only.
25ft minimum engagement with full auto.
0-25ft simi auto only.
Choose a starting point
By using this site, you agree to our terms and conditions. Please accept them before using our site.